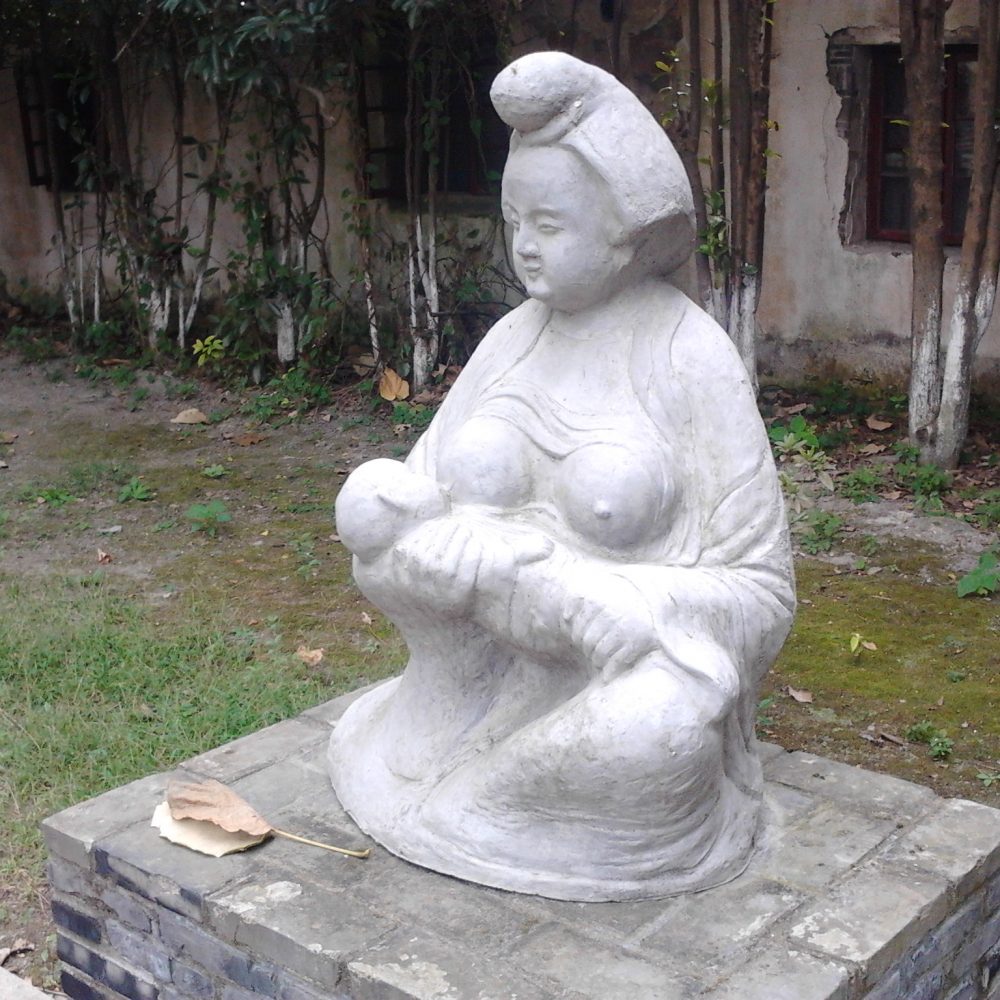 Inspired at least in part by the phrase “new contacts or new business opportunities” in the description of the currency of personal learning networks, I did something this week that I’ve meant to get around to for a long time: I created a separate Facebook profile for myself as a lactation consultant.

At the very least, it gave me a great excuse to use this photo I took near Shanghai in 2012. My goals in taking this step include:

1. developing an online presence specific to my role as a lactation professional — I will post and comment under this identity only on matters that more or less directly relate to breastfeeding support and advocacy;

2. reducing some of my “context collapse” on Facebook by separating my lactation-world network from my personal/political/academic network — my lactation colleagues don’t necessarily need to know what I think about other topics I might be discussing under my primary profile;

3. allowing myself to stay in touch with clients from my private practice, by friending them as my IBCLC profile (something I would not do otherwise — I’ve long had a policy not to “friend” the mothers I help breastfeed, lest my political stances, religious beliefs, or other aspects of my personal identity alienate them and become a barrier to their accessing breastfeeding support from me in the future.) It was a recent “friend” request from a new client that also led me to establish this new profile now.

4. last, not least, and perhaps most pertinent to this week’s topic, I suspect that using a profile with my IBCLC credential prominently visible will lend me a little more credibility in Facebook groups focused on breastfeeding … and may aid me in cultivating a professional network that crosses more boundaries than my personal profile’s network can do now, with algorithms that obviously tilt towards the echo chamber effect.

Of course, Facebook working as it does, after about 24 hours of existence, my new profile’s 37 “friends” include precisely two people with whom I wasn’t already Facebook friends under my main profile. I will try to connect with more new-to-me people with my IBCLC profile, and I’m considering pruning some friends from my main profile, if we rarely interact on non-breastfeeding topics. But this will take time and energy to implement.

I haven’t yet taken the next step to expand this IBCLC-specfic persona onto Twitter, but it’s a tempting prospect (see my comment last week that I need to curate my Twitter follows more mindfully to have any hope of coherent discussion there), and hopefully I will get around to doing that soon. 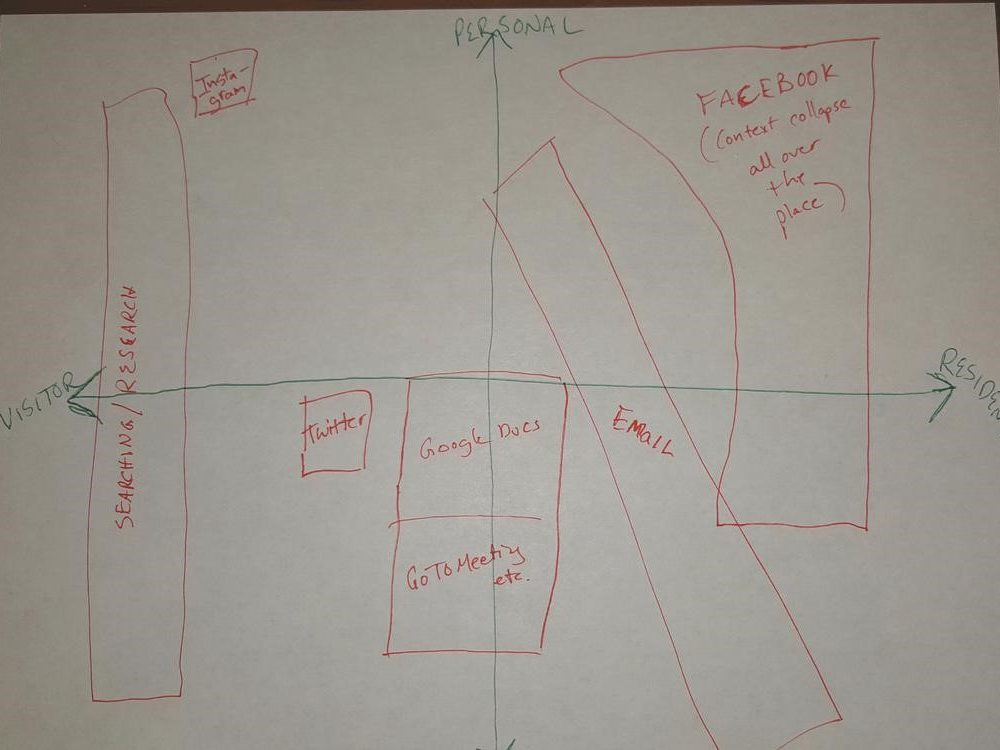 This week’s readings and homework helped me articulate some stuff:

I struggle with the tension between cultivating a professional online persona and being an introvert.

I also struggle with the contradictions between having a rich and full online friendship network but an online professional presence more characterized by, well, lurking.

On the other hand, where even is the distinction between professional and personal online life today? The terms from reading & video — decompartmentalization, context collapse – really resonated with me.

Following Fuji’s example, I did a very quick icognito google search on “rebecca ruhlen.” It produced links about my teaching, breastfeeding advocacy, social media accounts, publications, and lectures, along with some family-related links. Another Rebecca Ruhlen’s LinkedIn is listed, which could be a problem — I’ve never gotten around to creating a LinkedIn account for some reason.

To whom do I talk when I write online? …mostly friends on Facebook, although that term “friend” needs unpacking most days. I write best for interlocutors, which is to say that I typically write to respond to someone, not to begin a conversation, even if it looks like the latter. I do a lot of writing in response to something I’ve read, but aimed at my imagined community of friends (which in this case means that group of people whom I know are likely to want to know what I’m reading and thinking.) Writing — especially of the self-presentation kind — online for strangers, who may not already be inclined to look upon me in a friendly way has a chilling effect on me. I keep my thoughts more shuttered then. The feminist & feminine slant to most of my online work, in the broader context of routine misogynist harassment and threats, adds to my hesitation.

I was surprised and amused to read in Bonnie’s blog entry that people in 2012 got up in arms about live-tweeting academic conferences. The preponderance of my existing tweets probably consist of just that. I don’t read my Twitter feed often, and I tweet even less often. I find the former too confusing and overwhelming — I probably need to curate my follows a lot more mindfully, and stop worrying so much about tracing the precise contours of conversations on that platform. I tweet rarely for probably the opposite reason — far fewer followers than I have on Facebook, and far less sense of my audience since my tweets are public.

I also have an Instagram account, to which I rarely post (except for my recent #pinkhats4cocoabeans campaign) but which I maintain mostly to keep tabs on my teenaged son’s account. (One more layer in the work-life morass of online personae?)

I have a personal/professional website but have never developed it and am very embarrassed that it shows up in google searches on my name. I need to fix that. I also have a new website for my lactation consultant private practice, but it’s meant to be a static info & publicity resource – I’m not blogging there (or anywhere.) I didn’t include either website on my VandR map.

While we’re sharing embarrassing confessions, I miss the early-21st-century days of message boards. That was the format of my first “resident-style” online personae, albeit largely anonymous ones, and I remember relishing a frequent sense of discovery of new ideas and perspectives, while also developing really important online friendships and a sense of community around shared interests.