One of the themes that has come up a couple of times in this seminar has been the role that social media can play in gaining our students access to perspectives that have been marginalized within the academy. I suspect that the problem of marginalization is even more real within analytic philosophy than it is in other disciplines within the humanities. For instance, Elizabeth Barnes has observed that the perspectives on disability that one finds within analytic approaches to bioethics diverge sharply from the perspectives that one finds within disability studies programs. And in a recent(-ish) scandal, Hypatia – analytic philosophy’s leading journal on feminist issues – published an article on transgender and transracial identities, which somehow engaged almost none of the vast and rich literatures that have been developed on these subjects outside of analytic philosophy programs. One of the main lessons that I have taken away from these kinds of phenomena has been that, if analytic philosophy wishes to become less white, less misogynist, less cis, less heterosexist, less classist – less marginalizing – then analytic philosophers have to learn lessons that from other disciplines, and from people outside of the academy as a whole.

This has been one of my goals on Twitter, and I have found some really valuable resources: history, sociology, poetry, novels, all speaking to topics central to my own research and teaching, but in ways that depart productively from analytic approaches to these same topics. Of course, as I’ve mentioned, I feel like I have been extremely lucky in developing my “Personal Learning Network.” By luck, I had some great starting points, which took me in some very helpful directions. Professor Ball’s idea of a “Twitter Scavenger Hunt” gives me some really useful guidance about how to send my students into the world with a little more guidance. One thing that I have been thinking about, though, is how we can decide which sources to trust, and which we should regard with skepticism; and, more to the point, how we can use social media itself to to develop our judgments on these matters.

One of my early follows was Jesse Singal, a contributor to New York Magazine who writes quite a lot on trans issues in spite of his very apparent – and apparently persistent – lack of expertise on the subject. The trouble is that Singal manages to present himself as an authority on the subject, or at least, as a reasonable person interested in learning more, who simply cannot understand why so many people are so mad at him. This is a posture that plenty of people take on in public discourse in order to defuse critique. But I suspect that it is a particularly effective posture on Twitter, since one can play on extant narratives about “Social Justice Twitter” or “Outrage Twitter.” Since people start out with an image of Twitter as a place people go to because they want to get mad about something, Singal can caricature thoughtful critiques of his own articles as nothing more than grist for Outrage Twitter’s mill. I’m sure that there is something to this image of Twitter, and I know there is plenty of horrific stuff that does go on there, especially as Twitter’s management refuses to ban Nazis and misogynists. But I’d be interested in finding ways to communicate to students the ways in which charlatans weaponize Twitter’s public image as a cesspool of lefty outrage in order to maintain authority in domains about which they refuse to learn, so that they might cultivate their own Personal Learning Networks judiciously. 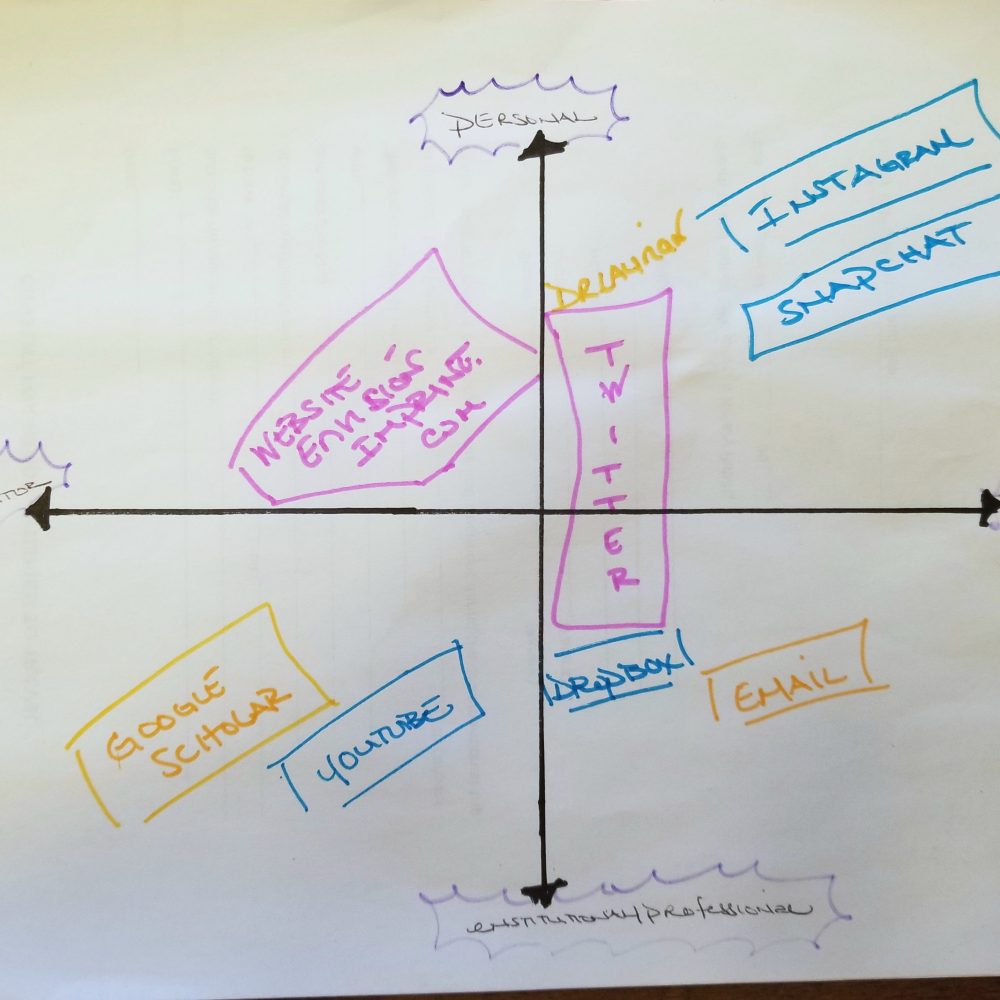 It has taken me a while to get going but at last, my visitor/resident diagram. My VR map tells me quite a few things. First, it affirms my fascination with visual learners and my admiration for them. I try not to think dichotomously about visual or auditory, but I am not sure that map is saying what I imagine. After taking this picture, I realize the apps I use most are missing– WhatsApp and MarcoPolo. Email was added as a perfunctory nod to the Davidson clog more than anything else but my walkie-talkie apps represent my leanings toward auditory styles better than the map itself.

One of the reasons this course drew my interest is because I struggle in my comfort within personas I aspire too–visual anthropologist. public visual anthropologist. I am not on Facebook. I have been Facebook-free going on nine years but I wish I was more adept at harnessing Twitter and other social media platforms because of that. Bonnie’s blog post about the push-back on live-tweeting at conferences was surprising as live-tweeting has gotten me through my social awkwardness of navigating conferences in the last few years. Through Twitter, I’ve learned about relevant scholarship more immediately and also found collectives of anthropology folx that I really like engaging with.  Instagram and Snapchat are personal and the only social media where I display family photos.

I have a personal/professional website Envision Imprint. I co-founded this blog with a friend/colleague from graduate school and it’s been running for about five years now. While the blog is not as developed as I would like (needs more content updates) I am proud that we keep it going and I hope to spend more time writing there in the future. Three years ago, I got excited about the Davidson Domains project, registered a site and have done nothing since. I am generally mortified by this.

I have been on Twitter for a few years now, and I still haven’t quite figured out how I want to use it. To this day, I mainly use it to discover writers and thinkers to whom I otherwise would have little exposure. (I have actually found that it works pretty well for this – provided you start out by following the right people, of course.) But I have been pretty hesitant to take on a more active role, tending to like and to retweet far more than I post any original content. This hesitation reflects a lot of concerns. Among other things, I am simply worried about the relationship between the norms that (should) govern discourse within the academy, and the apparent anomie that reigns on Twitter.

Bonnie Stewart writes that the Internet collapses all of our discursive contexts into one. This means (she continues) that we cannot put a face to our audience when we blog, tweet, or comment, and so cannot tailor our content to our interlocutors’ interests or needs. But it also means that we cannot count on others to approach our conversations in anything like the spirit that we maintain in our classrooms or that we expect in our journals. On the contrary, we can expect Stewart’s faceless audience to meet insight, knowledge, and critique with hostility, contempt, and obfuscation. We can expect the trolls.

The trolls’ arsenal includes some horrifying weaponry. At the limit, they doxx, they swat, they bring the death threats. But I am thinking about small-time trolls here, the kind who waste your time and sap your emotional energy by tweeting in bad faith. They’ll comment on your tweets in a bad facsimile of dialogical engagement, but they don’t want a dialogue. They want to wear you down, and they want to get a rise out of you.

The best advice I have seen: Don’t feed the trolls. Ignore them. When they comment on your tweets, let it go. Of course, I’ve seen some people do one better, besting the trolls at their own game. Here’s one of my favorite examples:

Isn’t there a ‘whole thing’ to be written about that too?

It shouldn’t be only one sided criticism should it?

You made a statement. I asked you what about the opposite? Shouldn’t that have been mentioned too?

We are going in circles. You mentioned ‘There is a whole thing to be written …white men sexually harass black women.’

Professor Tressie McMillan Cottom doesn’t feed the troll. She could have said something about the role that false concerns for the protection of white femininity have long played in the abuse of black men, but I think she knew (among other things) that Sayan Roy was not interested in learning this history. But she doesn’t ignore him, either. She responds in kind, suspending the discursive norms that govern earnest inquiry and so providing Sayan Roy with a collapsing floor as he attempts to launch his barbs her way.

Of course, if we take adopt either of these strategies – ignore or obfuscate – in response to trolls, then we have to we decide who is a troll, and who is not. And one of the most frustrating aspects of troll culture isn’t the behavior of the trolls themselves, but the way in which participants in public discourse at large – parents, neighbors, coworkers, politicians – rely on arguments that could come straight from the troll’s toolkit. For instance, Sayan Roy deploys a bit of “whataboutism,” attempting to undermine McMillan Cottom’s project by shifting our focus elsewhere. And of course, whataboutism is all around us, and has been for some time. (I would love to know who first asked, “But what about black-on-black crime?”) Given the overlap between the troll’s tactics and some recognizable features of our public discourse, we (like McMillan Cottom) face a choice: In the face of doubt, do we attempt to preserve the norms of earnest discourse, or do we ignore (or even troll) the troll?

There is one thing that I really like about trolling the troll in cases like this: It can serve to unmask the trolls hidden in the ordinary public sphere for what they are. Whataboutism in public discourse has always been trolling. It has always been an attempt to undermine the quality of public discourse in order to maintain the status quo. And treating it as such on Twitter – whether your interlocutor is a self-conscious troll or not – may help others to see that. When people ask “But what about black-on-black crime?” perhaps it was always a mistake to treat this as a question asked in good faith, and the response always should have been to ignore or to troll.

If this is the right response to the trolls, then it means complicating our public faces as academics, so that we can shift from the norms of public discourse to the norms of counter-trolling without batting an eye. McMillan Cottom pulls this shift off seamlessly. But our abilities to make these shifts require that others – including other academics, but perhaps most importantly including the institutions that employ us – recognize what we are doing as a valid move in our engagement with a complicated and sometimes hostile public. And a host of recent events have suggested that we cannot always count on that recognition, as institutions bow to outside pressure to reprimand good scholars for their refusal to treat the troll’s trash as valid contributions to public discourse, worthy of respectful attention and response.

I thought about this as I read Laura Pasquini’s “Why Academics Need a Digital Persona.” Cultivating a persona is not something that one can do on one’s own, because the contents of our personae depend on the ways in which others will perceive us, and on the ways in which they will represent us as they reproduce and respond to our activities. So if academics need digital personae, we also need institutions that will provide us with the support that we need in order to develop personae that are apt for the kinds of discourse that we find online. And while some institutions have provided this support to some people, few institutions have done so with the kind of consistency that we need if we are to bring our research to the communities we serve. In this uncertain landscape, it is challenging to know how we ought to engage when the trolls come knocking.