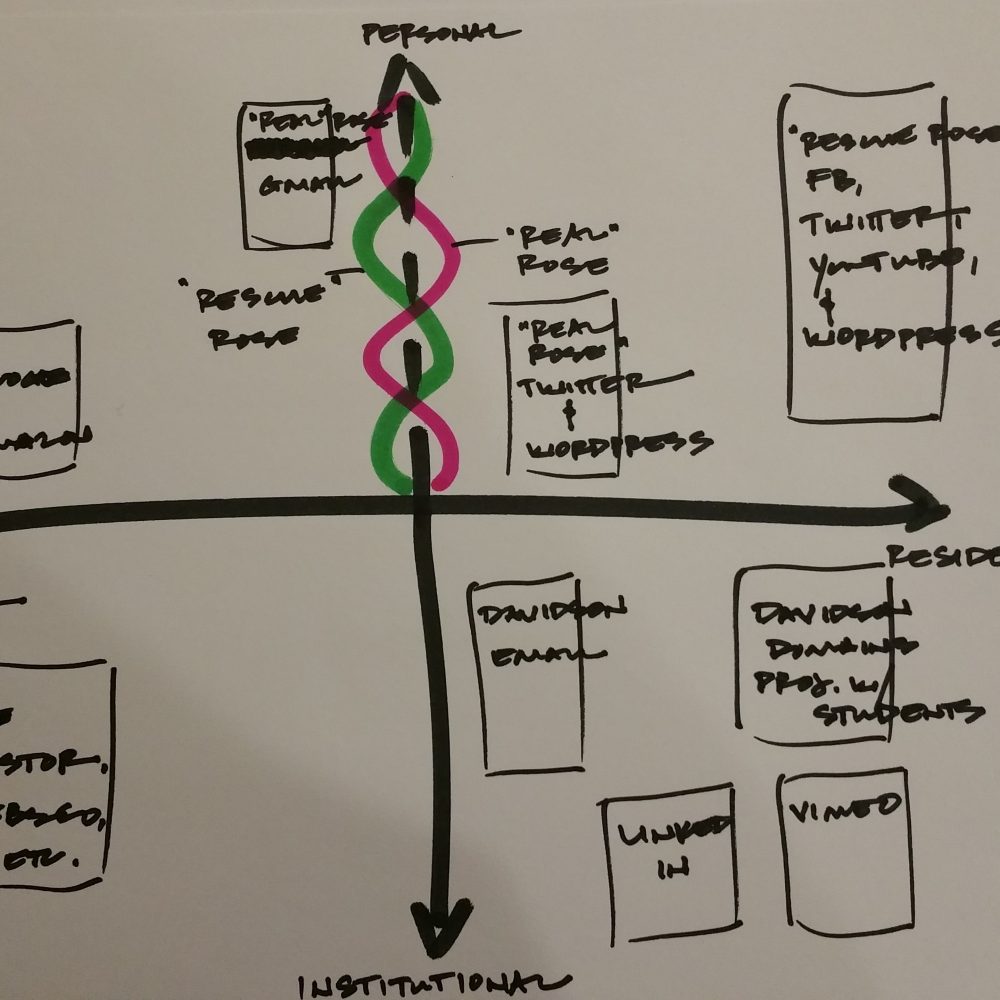 In my VR map, I indicate that I am present on the web most comfortably as a character, also named Rose – the me who is the public voice of a charity I run along with my husband and several others. We are a rescue that specializes in rehabilitating and rehoming abused and abandoned Great Pyrenees dogs. I manage our Facebook page and YouTube channel. This past summer, I started Tweeting for the rescue. (Facebook analytics suggests that our typical supporter is middle-aged, female, and white, and we want to reach other potential adoptive families and animal advocates. I will admit that I’m still trying to learn how to use Twitter for this purpose by following other rescues that do it well.) I also write content for our webpage. I’ve been doing this for nearly a decade now, and this is where I feel most at home on the web. I know our brand because I helped design it. I know what to say and, more important, what not to say in a range of complicated situations to protect the rescue and advocate for our dogs. I wish I felt that comfortable as a historian online. I don’t. I have a webpage, but I rarely post updates. Like John, I follow others on Twitter but rarely Tweet myself. I marvel at other scholars’ proficiency on the platform and think I should start Tweeting more. Tomorrow. When I also will wake up early to start jogging again, etc.

The fanboy culture around some mediocre but media savvy historians online has turned me off from being present and engaged more consistently. Until now. I’ve accepted that this ambivalence is 1) not an excuse to be absent 2) hurting me professionally. The historians being interviewed and quoted by journalists, in documentaries, etc. aren’t always producing better scholarship, but they are making themselves more accessible and communicating their ideas to broader audiences in ways that I am not. The audiences I want to reach aren’t reading traditional print scholarship.

I am stuck envisioning where “rescue Rose,” “real Rose,” and teacher/historian Rose will begin and end, and how I will integrate these very different parts of my life on Twitter and my blog. My goal is to become more active on these two particular platforms. My experiences on Facebook give me pause about doing this without planning and intention. On Facebook, I’ve had to delete many posts when some of the people I need to help dogs lock horns with some of my fellow scholars or conservative family members. Context collapse is exhausting when it leads to bickering. I’ve noted in my day planner to create another VR map a year from now. I hope to have integrated my web selves.